Foodborne Chicago depends on human judgment in addition to computerized predictions. First, the algorithm "surfaces tweets that are related to foodborne illnesses." Next, "a human classifier goes through those complaints that the machine classifies, [...determining] what is really about food poisoning and what may be other noise." The Foodborne team then tweets back at the likely cases, providing a link for users to file an official complaint. In short, computers deal with the massive quantity of Twitter data, and humans ensure the quality of the result. According to its website, between its launch on March 23, 2013 and November 10, 2014, the Foodborne algorithm flagged 3,594 tweets as potential food poisoning cases. Of these tweets, human coders have identified 419, roughly 12 percent, as likely cases meriting a reply on Twitter.

But does it actually work?

In its first nine months of operation, Foodborne initiated 133 health inspections. Approximately 40 percent of these investigations uncovered critical or severe violations of the health code -- the kinds of violations that force restaurants to shut down or to remain open only under strict conditions. As Richardson noted, "that percentage is equivalent to the ... percentage of violations we find based on reports we get from 311" -- the phone number citizens can call to report food poisoning to their city’s municipal services. (...)

Elsewhere in the brave new data-driven world: This description of an algorithmically-managed classroom seemed, at first, to be a thing that I would find myself supporting wholeheartedly, and then took a turn for the "definitely alloyed good". The good:

When these sixth graders get to class, they either log onto their laptop or check a monitor at the front of the room. It tells each student where to go — the room is quasi-divided by book shelves and small dividers into 10 sections, with names like "Botanical Gardens" and "Brighton Beach." The computer also tells them what kind of lesson they'll do.

Since [Kaswell] only gets his material 16 hours in advance, that means he has to be ready to create lessons on the fly and make a plan for students who need additional help.

"You still have to make the teaching your own," he said. But not everyone does that.

"A lot of people just take what's given to them [from the program] and do what they're told: 'This is my script, these are my kids who are here.'"

He stands silently next to a smart board and clicks a mouse. A tinny voice, a cousin of iPhone's Siri perhaps, begins the lesson. "How do you say two-point-zero-five-three? To read this, break it into two parts," commands the disembodied voice from a computer's speakers. (...)

I think that data-based algorithms definitely have a place in the classrooms of the future, but also that we'll look back at Teach to One et al. as disastrous early forays into the data-based classroom concept.

I have a friend who is blind. He is taking calculus at the local community college this semester (spring 2015). So am I. I have found my way into the role of math tutor for him. I'll blog about my adventures in translating mathematics curriculum and materials from sighted forms for blind-friendly use. There doesn't seem to be any infrastructure at our college for this adventure; we're breaking new ground together. (...)

It's in progress, and currently only three posts in, but I'm interested to see where it's going.

Mathematically inclined readers may be interested to read about Tree(3), covered on ℂℙ⁴, my newest-favorite math blog:

Usually, we expect fast-growing functions to have a relatively smooth, steady start. For instance, the Ackermann function begins {3, 4, 8, 65536, 2↑↑(2↑↑65536), …}, and the first four terms are quite small. By contrast, the function Tree begins with Tree(1) = 1, Tree(2) = 3 and Tree(3) is so vastly, incredibly large that it greatly exceeds anything you can express in a reasonable amount of space with iteration, recursion and everything else mentioned in the previous post, including C8' and the Goodstein function. (...)

Warning: serious math. (Blog seems to be active, on a 1-2 post/month rate, so some of the new stuff is neat, too.)

On the other hand, if you don't like math due to bad teaching experiences in school, I (1) completely understand and (2) still cannot fully endorse that you use ShipYourEnemiesGlitter.com to send your previous math teachers envelopes full of glitter. Yes, apparently this is a real thing. Promo art from their site:

On the other hand, I could definitely get behind a campaign of shipping glitter to this guy:

A gamer who goes by "Daily Dose" has pre-ordered over a hundred Rosalina [a female goddess figure in Super Mario Galaxy] amiibo [a new Neopets-ish line of action figures from Nintendo], solely out of hate for the character (to which I can only assume Nintendo responded with laughter all the way to the bank).

Why, you ask? "[T]his [is] a vengeance against the people who ridiculed me, insulted me, and are fans of stuff I hate. I do not appreciate Rosalina appearing in almost every recent Mario game to date this is pissing me off," said Dose. "The fact Nintendo promotes her so much and people praise her is just disgusting."

"I hate her fans too," he added. "I know for a fact her amiibo will be among one of the most popular which is why I took the time to wait and preorder over 100 of her." (...)

Have I lost you yet? This dude tried to buy all of the amiibo just so that no one else could have them, in protest of Nintendo releasing a(nother) playable female character. (He's pissed about the other ones, too, and has reportedly spent ~$4,000 on this crusade to overcome the forces of market capitalism.) Since it's not at all clear that the ambiibo were ever intended to be limited-edition, I think "Nintendo responded with laughter all the way to the bank" is about right.

Okay, but let's have a serious talk about the (slowly) changing culture of video games. Take, for example, Life is Strange, recently picked up by Square Enix:

Max Caulfield has been absent from Arcadia Bay, Oregon for five years now, but upon returning home, discovers that Rachel Amber, a fellow senior at school, has disappeared under mysterious and rather uncomfortable circumstances. While trying to uncover the truth, Max reunites with an old friend, Chloe, and makes a startling discovery: Max has the power to rewind time. (...)

Right, so what's your point, Ross?

Square is basically the only publisher who didn’t want to change a single thing about the game. We had other publishers telling us to make it a male lead character, and Square didn’t even question that once. (...)

And, like a game I reviewed in 2014, the protagonist isn't a "strong female character" -- she's a female character who is strong, weak, or herself, as good storytelling demands.

Life is Strange doesn't, on face, really seem to be my style as far as games go, but I may very well give it a spin when I've worked through my Steam Winter Sale backlog, just on principle. Here's the cinematic trailer:

Here's the announcement by Square Enix, and here's a roundup of reviews (compiled by SE) interspersed with some awesome splashy game art.

Okay, we're going for a double linkwrap again. Seriously, Ross, don't you have anything productive to do?

On the other end of the 'games' topic: Nice Neighbors is a puzzle game that uses players' solutions to prove unsolved results in graph theory:

The results in the paper (in particular Lemma 2.9) show that determining reducibility of a given digital image is equivalent to winning the game on this page.
Each “experimental level” in the game with at least 8 points represents a specific digital image whose reducibility is not known. If you can win on these levels, you are assisting in the effort to classify digital images by their reducibility. Thanks! Your solution will be saved and used in future research projects. (...) 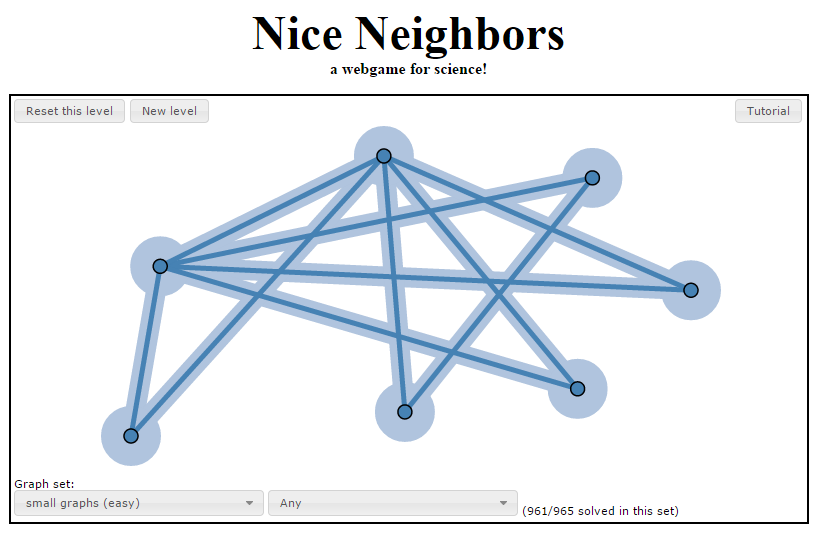 There's a playable tutorial through the link.

I'm not sure how graph-puzzle games relate to rocketry (I tried about three versions of "Remember rocket-lander games? Well, this one's for real." but they all sucked.), but here's a Vine of SpaceX's attempt to land a Falcon 9 rocket on a barge in the Atlantic:

He's not kidding -- for all that the rocket looks like it blew up, he clarified, shortly after the news broke:

Ship itself is fine. Some of the support equipment on the deck will need to be replaced...

Space is hard, but SpaceX is doing a really good job of making it look like it's not that hard...

Grid fins worked extremely well from hypersonic velocity to subsonic, but ran out of hydraulic fluid right before landing.

Upcoming flight already has 50% more hydraulic fluid, so should have plenty of margin for landing attempt next month.

Am super proud of my crew for making huge strides towards reusability on this mission. You guys rock!

What if there was a lake on the Moon? What would it be like to swim in it? Presuming that it is sheltered in a regular atmosphere, in some giant dome or something.

A pool on the moon would be really cool, but is probably far in the future. But today, the MIT Media Lab's Tangible Media Group has a new really cool toy:

The Tangible Media Group has details on inFORM, and plenty of other cool concepts on their site.

Elsewhere in tech: Google has a policy of making its research on software vulnerabilities available to the public... after giving software developers 90 days to patch them. Apparently, this is two days too few for Microsoft to roll patches in Windows 8.1 in time:

Google published details of the bug as part of its Project Zero initiative, which it claims gives companies enough advanced warning -- 90 days exactly -- to fix vulnerabilities before they go live. Microsoft, however, says it told Google that it was planning to introduce a fix using its "well known and coordinated Patch Tuesday" update, and that the search giant's behavior endangers customers. (...)

A few interesting snipy comments from both sides in The Verge's coverage.

Also in California, Ben Kuhn surveys the research literature on whether donation-matching campaigns actually increase donations, and just how effectively:

In the effective altruism community, donation matches are becoming very popular. Some matchers have gone as far as tripling or even quadrupling each dollar donated, not just doubling. But I started to wonder if the matching multiple -- or even matching at all -- has any impact on the money you raise. In this post, I’ll take a look at some of the academic literature on donation matching to see whether such matches are justified. (...)

...and Jeff Kaufman has an excellent short-form post on "The Privilege of Earning To Give", making very eloquently a point I've tried to before, but did not do well:

If you think of privilege as something you have that makes you a bad person, if you know the word and know it applies to you but you try to hide and dismiss your privilege, to find axes along which you have less of it, that's only marginally more helpful than if you were to deny your privilege entirely and insist that all your accomplishments in life have been due to your efforts alone.

Having privilege puts you in position where you have an outsized ability to effect change. The best response to privilege is to turn it to fixing the situation that led you to having these major advantages over others. (...)