Welp, some weeks I just sit on the linkwrap for an extra five days. Plan is still to throw another one up this Friday, by which I mean, tomorrow... urp.

Sometimes, when we're interacting with people on the internet, we forget that, on the other end of a digital pipeline, there's an actual human being.

...and so, sometimes the right way to deal with internet trolls is by letting their mothers know what they're up to:

Alanah Pearce, student and sometime-game-reviewer, is quoted in The Guardian:

"A while ago, I realised that a lot of the people who send disgusting or overly sexual comments to me over the internet aren't adult males... It turns out that mostly they're young boys and the problem is they don't know any better, so responding to them rationally didn’t resolve the situation. And it got to the point where their comments were starting to make me feel really uncomfortable."

When Pearce sat down to figure out the best way to resolve the situation, she concluded she was best off contacting the boys’ mothers directly, "especially as most of them write to me through their personal Facebook pages. It's shockingly easy to find out who their families are."

At the other end of the twenty-first century cultural milieu from the land of the Internet is the hipster clique, about which Christy Wampole opined in the NYT two years ago last week. Still relevant, though:

[T]he ironic clique appears simply too comfortable, too brainlessly compliant. Ironic living is a first-world problem. For the relatively well educated and financially secure, irony functions as a kind of credit card you never have to pay back. In other words, the hipster can frivolously invest in sham social capital without ever paying back one sincere dime. He doesn’t own anything he possesses.

[Hipsters] produce a distinct irritation in me, one that until recently I could not explain. They provoke me, I realized, because they are, despite the distance from which I observe them, an amplified version of me.

I'd like to think that, after reading the article, I looked at myself and saw there a rejection of irony and an embrace of genuineness. But I didn't -- there are too many things that I do just to be ridiculous, incongruous, or silly. Is that okay?

Probably, maybe, I don't know. Probably a good thing to write about later. But I'll leave you with one thing to chew on:

A man I count as a mentor once asked me: "What's the strangest thing you believe?" -- it seems that, perhaps a more apt question for an age of irony is: "What do you believe without irony? What, really, are you willing to admit before the world to believing? What must you believe, without believing which you'd not be you?"

And, turning to a stellar example of a celebrity-in-some-circles who consistently rejects irony in favor of full-throated enthusiasm...

If you're anything like what I imagine a plurality of my readership is like, you watched a decent amount of Vi Hart as a kid, or at least, have seen one or two of her videos. (If not, well, you're one of today's lucky 10,000... start with Doodling in Math Class and run from there.)

But anyway. After having made a name for herself on YouTube as a popular mathematician, she's turned to other hobbies, including twelve-tone music, commentary on Net Neutrality, and, most recently, pioneering the future (present?) of virtual reality internet:

Neat stuff -- mathematics, art, and science! -- abounds at elevr.com. It's probably really-really cool to poke around if you've got an Oculus Rift aut sim, but the rest of us can fake it by staring at the eleVR web player and letting our eyes defocus.

Not virtual reality, but alternate reality: altered photographs of cityscapes imagined under clear skies with all (artificial) lights off: 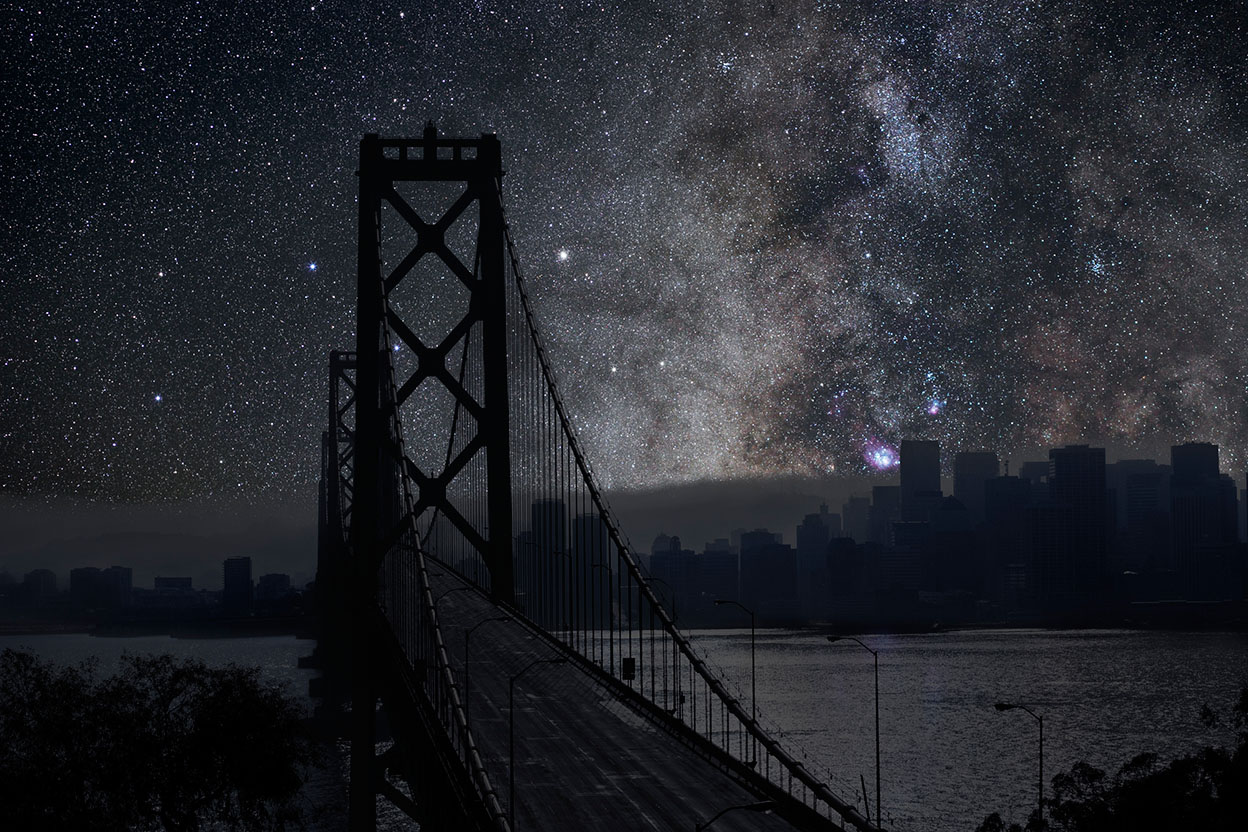 And more on imagined reality superposed with real reality: A one-time debate-team teammate, Agree Ahmed, has a piece on Medium unpacking A Perspective on Van Gogh and Slope Fields, where he asks of several of Van Gogh's landscapes, "Which way are the brushstrokes pointing?"

If you answered "Toward the vanishing point.", congrats! If you're now asking "What's a vanishing point?", read on! Agree uses the same effect to sketch a few of his own impressionist-ified pencil drawings, which I find pretty neat.

And, in artificial-reality of a completely different nature... The Guardian: China['s press-regulatory agency] bans wordplay in attempt at pun control.

I kid you not:

It has banned wordplay on the grounds that it breaches the law on standard spoken and written Chinese, makes promoting cultural heritage harder and may mislead the public – especially children. The casual alteration of idioms risks nothing less than "cultural and linguistic chaos", it warns.

"I wonder if this is not a preemptive move, an excuse to crack down for supposed 'linguistic purity reasons' on the cute language people use to crack jokes about the leadership or policies. It sounds too convenient."

...for example, the Grass Mud Horse, which I found on Wikipedia, when poking further into the topic of slang-puns among Chinese internet dissidents.

The superintendent of a school district in Illinois has issued a directive banning any discussion in classrooms of [X]...

Hint: It was (and recently again is) a current event. Writes David Cohen, California teacher, about the same:

I think we have to be willing to toss out the lesson plan, or revise it. This must be done thoughtfully and advisedly, of course. A teacher needs to know the students, the community, and have the skills and sense to manage whatever is about to replace the regular lesson. But certainly, if we place the lesson plan ahead of significant moments in our communal life, we not only rob students of a chance to learn something more lasting and potentially important, but we also unwittingly reinforce the oft-heard but incorrect message that school is separate from 'the real world.'

Steven Singer, a Pennsylvania teacher, wrote Wednesday on his own blog about his own experience addressing the events in Ferguson, MO in his own classroom:

Some groups talked more than others. Some students spoke softly and with an eloquence beyond their years. Many only shook their heads.

One boy asked me, "Why does this keep happening, Mr. Singer?"

It was the question of which I had been most afraid. As a teacher, it's always uncomfortable to admit the limits of your knowledge. But I tried to be completely honest with him.

"I really don't know," I said, "But let's not forget that question. It's a really good one."

I'm reminded of the stories one of my teachers would tell about the conversations his history class had in the days, weeks, and years following the 9/11 attacks. Students who knew people who had escaped the WTC towers, students who knew people who didn't, and one student who was in the Pentagon to see the DoD doctor on that particular Tuesday**...

And I'm reminded of a song I remember hearing countless times as a kid -- on the live recording, artist David Wilcox laments "this is a song which is unfortunately current...again":

For resentment doesn't die with the dead

Despite what the [grand jury] said

And this oil slick of blood across the [country] will spread

And just poison our own well instead

For there's no far away

There is no more far away

And these dreams of the wild west

There is no more far away